It is one thing to believe that the gospel is of God, and...

It is one thing to believe that the gospel is of God, and quite another to prove that the gospel is the power of God over sin and disease. And yet such proofs were given by the Master and his students. A New York lawyer testified at our Wednesday service, that he and his wife had been healed by Christian Science, and he said in the Christian Science Church he attended there are some thirteen hundred members and a congregation of two thousand. In this membership there are people who have been healed of almost every conceivable type of disease. He said that he knew personally of more cases that have been healed in Christian Science than are recorded in all the New Testament. He added that orthodox belief in the gospel rests on the evidence of four men, Matthew, Mark, Luke, and John, all of whom died nearly two thousand years ago, and no writing of theirs remains.

The witnesses to the efficacy of Christian Science to heal and to save men to-day, in every way that divine Truth ever healed or saved, are unnumbered and fast increasing. These witnesses are our countrymen, and can be examined and cross-examined, and some of them have undergone such examinations in the courts of law, and by uncontradicted and unimpeached evidence the facts of Christian Science healing have been proved. So that Christian Science not only rests on the Bible but on a divine and working Principle, the Mind of Christ, whose mighty works are to-day established in our land by a host of witnesses and by proofs positive and convincing to all who without bias have examined the evidence.

Send a comment to the editors
NEXT IN THIS ISSUE
Article
The world has had many religions, philosophies, and... 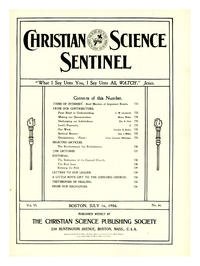