The Cure of a Blind Man

That the curative power was not in the clay is evident from the fact that the blind man whose eyes Jesus had anointed with spittle and clay was commanded to go and wash. If clay and spittle were a curative for blindness in Jesus' time, why is it not so still? Besides, if this were a material cure, why did the materialistic Pharisees cause such an uproar about the affair? Why did the man who was healed say, "We know that God heareth not sinners; but if any man be a worshiper of God, and doeth His will, him He heareth.... If this man were not of God, he could do nothing"? Or why did Jesus say, "For judgment I am come into this world, that they which see not might see; and that they which see might be made blind"? Jesus often declared that a material age requires a material sign as an evidence that something is being done.

Just as the spiritually blind Pharisees were willing enough to recognize that a cure had been wrought upon the blind man, and were anxious enough that God should have the praise, but rejected the form and manner through which the divine presence wrought the healing, so still does the material thought cling to matter as the divine and true method of healing, and reject the power which is from above. 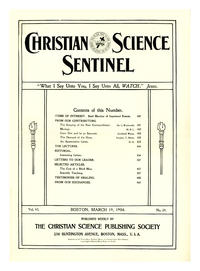