Before the advent of Christian Science people were often taught on retiring for the night to think over all that they had done or left undone during the day and to spend much time in grieving over the day's sins of omission and of commission. It was very commonly deemed an important part of the Christian's duty to spend much of his life in mourning over his past sins and failures, and this tended to produce a kind of sad resignation which has sometimes been thought to express a high degree of piety. The story used to be told of a boy whose father drove a nail into a post whenever the boy did wrong and drew out a nail whenever the boy resisted a temptation. At first the post became well filled with nails, but gradually these were drawn out, until finally the time came to draw out the last nail. The father expected the boy to be delighted, but to his surprise the boy burst into tears and exclaimed, "The scars remain!" Each day's record in the book of life was supposed to be permanently marred by the blots of the daily misdoings, and it was forgotten that the prophet Isaiah had proclaimed, "Though your sins be as scarlet, they shall be as white as snow."

When the hour of his betrayal was near at hand, Jesus took with him the three apostles whom he most trusted and asked them to watch with him in a brief hour of prayer. Three times in this hour of his agony he returned to find them asleep. Later on, when those appointed came to arrest him, Peter's first impulse was to draw his sword and fight, but later on he acted upon his second impulse, and with the other apostles he forsook the Master and fled. So when Jesus was on trial at the house of the high priest, only one of the disciples was present in the courtroom, and he not as the friend of the prisoner, but as the friend of the high priest, the chief of the judges who condemned the prisoner. Peter, too, though he loved his Master and wished to know the result of the trial, did not dare to risk his life by openly avowing his sympathy, but stood with the high priest's servants and with those who were probably part of the mob that cried, "Crucify him!" When Peter was recognized and accused of being a friend of Jesus, he positively denied the charge twice, and finally became so frightened lest he might share his Master's fate, that he cursed and swore, confident that this would prove to all that he had no part with the prisoner. 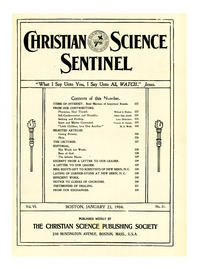