We have before us a clipping from a newspaper published in one of the cities of the Middle West which reports the action taken at a recent regular monthly meeting of the local Ministerial Association. The clipping states that the ministers assembled at this meeting decided to appoint a committee from the churches of the city to investigate the practice of Christian Science, and to embody in its report that which shall stand as the opinion of the ministers regarding Christian Scientists; that the members of the Ministerial Association thought it time to make an expression of the matter, and that they have taken this means of getting at the truth. It also states that it is not intended that the committee shall be made up of ministers entirely, but shall consist as well of members of the congregations of the various churches of the city, and that it shall report in two weeks, which is deemed sufficient time to make the proper investigation and inquiry into the foundation of Christian Science.

Questions which naturally arise are, Upon what basis will this committee conduct its investigation? Is it intended that the report shall include the testimony of those who have been healed of serious disease, in some cases of disease pronounced incurable by physicians? Will the committee give heed to the testimony of persons who have been reclaimed from drunkenness and other sins to which they were in bondage for years? Will it take into consideration those who have been rescued from agnosticism and infidelity? If the experiences of all these people are considered by the committee, its report will be of value, not only to the Ministerial Association but to the world at large. If, on the contrary, the committee attempts to report only the views of those already prejudiced against Christian Science, its report will be valueless. 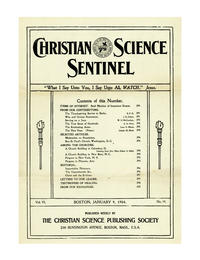