The Dawn of Peace

My peace I give unto you.—JESUS.

IN the presence of the ceaseless turmoil and strife of human history, men have read the words of Jesus with mingled feelings of incredulity and hope. Many Christian men, in practical approval of the material law of the survival of the fittest, seem ready to condone war as a necessity, and at the beginning of this twentieth century one may find prominent religious journals exploiting the army and navy of a so-called Christian country, and giving the most effective engines for the destruction of human life the commendation of beautifully illustrated descriptive articles! It would seem that they understood the words of Jesus, "I came not to send peace," to mean, not that the excitation and resistance of error is an inevitable incident of Truth's appearance, but that Truth must meet and overcome error upon its own ground and with its own weapons. And yet there stand the words of the Master, "Put up thy sword," and his voice is heard in every responsive heart pleading for the things that make for peace, and slowly but surely the tolerance of strife, the consent to its legitimacy, is passing from the Christian consciousness.

The recent gift of a million and a half dollars to erect a building for the use of a permanent International Court of Arbitration at The Hague, is but one of many incidental and encouraging evidences of growth in the world's recognition that physical combat between nations is as animal, and as degrading as it is between men; that the adjustment of international difficulties is both wise and feasible, and that the settlement of conflicting claims through mutual concession is the only course that is in keeping with national dignity. 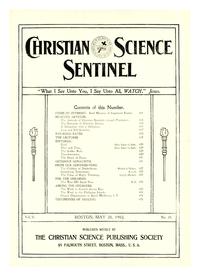