The writer of an exceedingly suggestive article in your issue of February 22, entitled "Faith, Nature, and Health," discusses the modus operandi of healing the sick. In this connection he makes special references to Christian Science which I desire to review briefly. This task will be the more agreeable because Oregon Richmond has expressed his opinions with quiet conviction, as far as possible removed from the manner of stormy denunciation which was once quite common. Indeed, he asks why the medical profession should ridicule the work of Christian Scientists and others. He gives it as his opinion that it is not now a debatable proposition that the Christian Scientist, among others, is "frequently instrumental in the restoration to health of persons who have been declared to be incurable by members of the medical profession." Especially striking is his statement that: "No honest physician can yet say 'I cure disease.' He stands just where the priests of Æsculapius stood thousands of years ago. He is powerless except to 'assist nature.' " 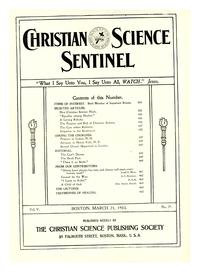