A law recently enacted by the Philippine Government provides that one hundred native young men shall be sent to the States every year to be educated and fitted for positions in the insular civil service. By competitive examination one hundred are to be chosen, and from these the Governor may select those who are best qualified. He is also authorized to select and appoint twenty-five without subjecting them to competitive examination, but the whole number sent to the States in the first year must not exceed one hundred. For the support of each student the Government will pay $500 a year, and those who go to the States under these conditions must sign an agreement binding them to return after the completion of their education and to take an examination for appointment in the civil service. It is expected that while they are in the States these young men will live with American families.

It is reported from Manila that leaders of the Federal party are preparing a petition to the United States Congress asking that the Philippine Commission be reorganized. A Manila Cablegram to the Chicago Tribune says: "They will ask that the membership be increased by the addition of two Filipinos and one American, and also that the salary of the Filipino members be increased because the auditor, the collector of customs, the attorney general, solicitor, and treasurer receive salaries of $5,000 in excess of those paid to the present native commissioners. The petition also will set forth the desire that the secretary of finance, secretary of justice, secreatary of commerce, and secretary of police be so appointed that two natives may hold office as secretaries. It is believed that this is the motive for a concerted demand for the appointment of more native office holders at higher salaries." 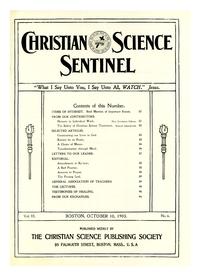