The attitude of Jesus toward wealth is a problem of frequent discussion, and as frequently finds strange and inadequate solution. It is not often that the world side, where money, selfishness, and competition seek for mastery, claims that Jesus actually took the side of the poor man as against the rich, and yet the presumption is sometimes made, probably for the purpose of controverting the claim attributed to the Christian world, that Jesus was at variance with the rich and in sympathy with the poor. It is assuming what is not generally held by Christian teachers, when it is affirmed that the readers of the New Testament consider Jesus to have taught that poverty is a virtue and wealth something to be condemned. What Jesus denounced was the love of gain and the lust of acquisition. He always drew a distinction between a man and his possessions, and in deciding for or against a man it was wholly on account of the relationship which the man sustained to his possessions.

It is certainly an anomalous position and one that is selfcondemning, for the world to attempt to make out a case that Jesus actually put himself at variance with the rich and taught that it was better for a man to be poor. He did say that it would be difficult for a rich man to enter into the Kingdom of God; not on account of his money, however, but because his affections were placed upon his wealth. 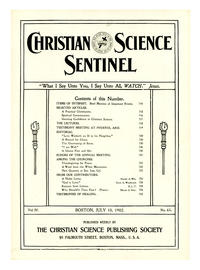