The present Senate contains fifty-four Republicans and thirty-four Democrats out of a total of ninety seats. As the result of losses in some States and gains in others at the recent elections the present majority will be increased by two at least. In the present House of 357 the Republican majority is forty-one. The new apportionment increases the seats to 386. The returns indicate a majority of only twenty-eight to thirty-four in favor of the administration.

Senor Concha, the Colombian Minister, called on Secretary Hay last week by appointment to resume negotiations concerning the necessary rights to be conferred upon the United States for the construction of the Panama Canal. It is believed that Colombia wants $10,000,000 instead of the $7,000,000 proposed by the United States. This difference is not considered a serious hindrance. 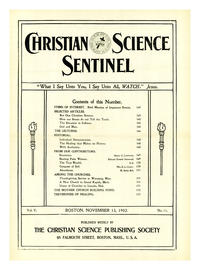