An interview with National Football League running back Tommy Vardell

A Graduate of Stanford University, where he starred on the football team, Tommy Vardell is a running back with the Detroit Lions. He has played in the NFL for seven years. Vardell is a Christian Scientist, and Rick Lipsey, a reporter at Sports Illustrated, spoke with him about the spiritual approach he brings to the gridiron. 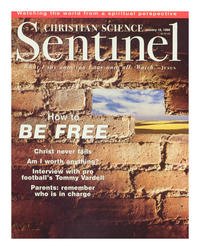