Discipline based on the oneness of Mind

"Discipline is the kindest thing we can do for them," a fellow Christian Scientist told me. I had just begun a job where I was constantly called on to discipline young people who most of the time had no intention of being disciplined, and I felt woefully inadequate at the task. So often my attempts at discipline turned into a clash of wills where no one gained anything, and everyone ended up feeling resentful and unhappy. But as I prayed my way through each situation for the next several years, there was much improvement, and I had many outstanding proofs of God's ability to govern His own children harmoniously.

My feelings of frustration in the face of a discipline challenge certainly aren't unique. Neither was the healing I experienced as I turned to God. Through the truths learned in Christian Science, many have been helped to demonstrate harmony in even the most difficult situations.

Send a comment to the editors
NEXT IN THIS ISSUE
Article
Youth, and finding what life is all about 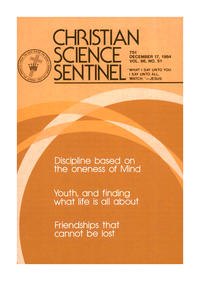