"She doesn't know why she surrendered to the impulse," commented a lawyer. He was defending a woman accused of stealing some small items. She came from a prosperous family and could have paid for the things many times over from the money in her purse. There was no apparent explanation for such an act of dishonesty.

This is far from being an isolated case. Thousands of comparatively affluent, otherwise law-abiding people appear in court each year and plead guilty to shoplifting. They are humiliated. In defense they can only murmur in shame, "I don't know what got into me." But Christian Science shows that in so saying these people hint at an important fact that could teach us all a valuable lesson. It could help to show us how to face up to evil, see through its pretensions, and defend our natural, God-given integrity when we are tempted to commit criminal and immoral acts of any kind. 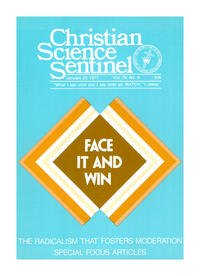