"Well, if you were halfway intelligent, you'd never be a Christian Scientist," Herb said. Nancy, who had grown up in a family of Christian Scientists, knotted up inside, but she couldn't think of a thing to say in defense of herself. She had begun the year with so many friends she'd been voted in as president of the ninth grade class. But her popularity had dropped to zero under Herb's attacks on her religion.

Send a comment to the editors
NEXT IN THIS ISSUE
Editorial
I, or Not I 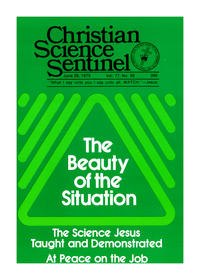