Bill was eleven. He liked helping out at home. Saturday mornings he often would take his bicycle out and take letters to the mail. One Saturday morning his father gave him a small package to be weighed at the post office.

Before getting to the post office Bill had to pass the school yard. As Bill approached it, he noticed a group of teenagers on bikes in a huddle. When Bill came nearer, two of the older boys pointed at him and giggled.

Send a comment to the editors
NEXT IN THIS ISSUE
Article
Freedom, God's Gift to Man 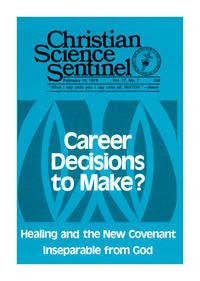