My first healing in Christian Science occurred years ago

My first healing in Christian Science occurred years ago. I was suffering from a severe nervous condition which included insomnia. I became overwhelmed with fear and finally decided to see a physician. He gave me a thorough checkup, and prescribed a medicated capsule. After a few nights elapsed with the same symptoms, I became extremely despondent, with no hope of relief.

At this point a member of the family handed me a copy of Science and Health by Mrs. Eddy and urged me to read it. At first I was reluctant to do so. However, the following day the thought came so forcibly that I decided to read it. As I opened the book, the first lines of the Preface were illumined to me (p. vii): "To those leaning on the sustaining infinite, to-day is big with blessings." I resolved to give up all medication, to study earnestly, and to strive to assimilate this system of healing based on the divine Principle of Jesus' teachings and demonstrations.

Send a comment to the editors
NEXT IN THIS ISSUE
Testimony of Healing
Mrs. Eddy states in the Manual of The Mother Church (Art. VIII, Sect. 24)... 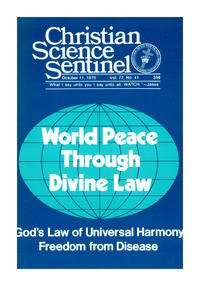