A scream, a scuffle, the crash of blocks, and then a loud wail issued from the children's room, followed by the tearful presence of our four-year-old. It had been a difficult afternoon. After having pushed his brother and kicked his toys, this little boy now came to me crying and saying that his ear hurt.

As a student of Christian Science, I had learned that God is the perfect Father and Mother of everyone, including this child. I remembered that the Bible says, "God created man in his own image .... And God saw every thing that he had made, and, behold, it was very good." Gen. 1:27, 31; 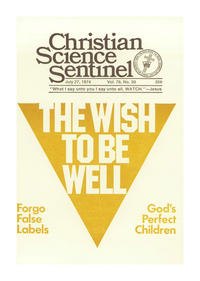