The Bible tells us, "Train up a child in the way he should go...

The Bible tells us, "Train up a child in the way he should go: and when he is old, he will not depart from it" (Prov. 22:6). I am one who was exposed to Christian Science from early childhood but was uninterested in it until after attending college. May this testimony bring encouragement to parents faced with such a problem and show them that the training does eventually bear fruit. How grateful I am that, like the prodigal son, I came to myself, recognized that the kingdom of heaven had always been just at hand, and hastened to accept it!

In Science and Health Mrs. Eddy tells us (p. 264), "As mortals gain more correct views of God and man, multitudinous objects of creation, which before were invisible, will become visible." When my husband and I had been married for some time and had no children, he agreed to have a Christian Science practitioner work for us. It was a wonderful opportunity to begin to glimpse the fatherhood and motherhood of God and the spiritual fact that creation is unfoldment. The practitioner and I worked with the above quotation and gained "more correct views." Within a short time a daughter was born; and several years later we were blessed with another daughter. The birth of the second child was completely painless.

Send a comment to the editors
NEXT IN THIS ISSUE
Testimony of Healing
For over twenty years Christian Science has been my only... 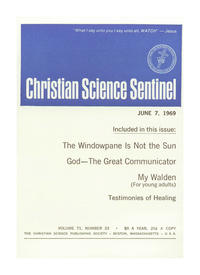