Thanksgiving on the Beach

Chris had always wanted to camp out at the beach during fall vacation. Everything really belongs to the sea gulls then. The beach is bare—miles of warm sand to walk on. When night comes, it's cold and much darker than in summer. You can see a thousand new stars.

Chris and his family pulled into the Ranger's Station early, and he gave them a campsite right on the bluffs. Nothing separated them from the Pacific Ocean but cliffs, railroad tracks, and the beach, It was great. Chris put the tent up for the five of them: his mother, his cousin, his two brothers, and himself. (His dad had stayed home to work.) It went up in record time—ten minutes. He hung the lantern for night, set up the stove, and filled the cupboard with food for the four days. They each took an air mattress to blow up and sat around the table huffing and puffing. His mother said, "Thank You, God! It's just perfect. 'The day is thine, the night also is thine: thou hast prepared the light and the sun.'" Ps. 74:16; 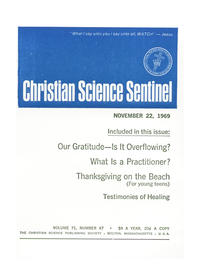