In the First World War I received a bullet wound in the knee...

In the First World War I received a bullet wound in the knee that many doctors claimed was incurable. They all agreed or the diagnosis that the condition could never be cured. Among them was one of the greatest doctors in England and one of the greatest in America. It left me crippled and in intense pain every second of my life.

Then I got a pain that left me almost helpless and almost kept me from breathing. I also had a complication of troubles, such as insomnia, fever, indigestion. Unable to take medicine and finally not able to eat normally for long periods, I was never more than one hundred and seventeen pounds.

Send a comment to the editors
NEXT IN THIS ISSUE
Testimony of Healing
It was my privilege to attend the Christian Science Sunday School... 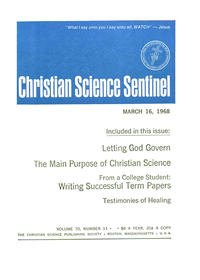