When I was sixteen, I read two books which were based on the...

When I was sixteen, I read two books which were based on the thought of man's status as a child of God. This thought never let go of me, and eight years later I found the way to Christian Science. Sixteen years have passed in the meantime, and through many blessings I have learned that the divine Mind governs man. To reflect God's government, it is requisite that we increasingly lay aside mortal mind with its beliefs, such as sensitivity, hidden resentment, and lack of disciplined thinking, and stand up to the claims of hypnotism.

I worked in a mill for the manufacture of photographic paper. One of my duties was to arrange on a wooden stand, six inches high, rolls of raw paper for processing. The rolls measured somewhat over three feet in length and approximately one foot and a half in diameter and weighed somewhere between two and three hundred pounds. As I was doing this one day, a roll fell onto my left big toe.

Send a comment to the editors
NEXT IN THIS ISSUE
Testimony of Healing
When I was in my early teens, I was offered a book to read,... 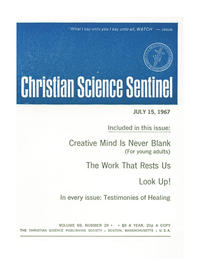