I'm sure that every child as well as every adult is acquainted with the typical plot of a western movie in which a band of marauders plunders the countryside and continually lays it waste until the good people learn how to defend themselves. The victims have to learn how to identify the criminals and they have to learn the art of self-defense. There is the necessity to recognize law and to establish order, to cooperate with other law-abiding citizens, and to manifest alertness and responsibility.

Such a situation was not unfamiliar in Bible times. With some variations the same plot has been enacted many times throughout history. We can trace the interplay of forces of good and evil in the life of Christ Jesus. He was a master at self-defense. When he was in the wilderness and the devil was laying traps for him, he was able to counter every move that the devil made and defeat him. Later on in his experience a mob tried to take him and throw him over a cliff. He was able to demonstrate his protection and come out unharmed. The Pharisees contrived to catch him in his words and acts so that they could find an excuse to have him put in jail. But he saw through their pretenses and thwarted their plans. At the last when to all appearances he was defeated—taken, crucified, and entombed—he still proved the power of God under every circumstance and carried out his mission to the end. He overcame the last enemy.

Send a comment to the editors
NEXT IN THIS ISSUE
Testimony of Healing
For many years before finding Christian Science, I was a medical... 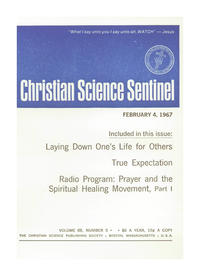