Few people admit that they are superstitious. The word brings visions of walking under ladders, seeing black cats, et cetera. However, there is a deeper meaning to superstition than belief in luck, either good or bad. One dictionary definition of "superstition" reads in part, "An irrational abject attitude of mind toward...God, proceeding from ignorance, unreasoning fear of the unknown or mysterious." Superstition, then, is nothing but self-deception based on false mortal opinions.

Consciousness awakened by the study of Christian Science to the truth of one perfect God and His perfect control of His perfect creation nullifies faith in the unknown that springs from imagination based on false evidence and that leads to uncertainties. Paul said, "Though we walk in the flesh, we do not war after the flesh: (for the weapons of our warfare are not carnal, but mighty through God to the pulling down of strong holds;) casting down imaginations, and every high thing that exalteth itself against the knowledge of God, and bringing into captivity every thought to the obedience of Christ." II Cor. 10:3-5;

Send a comment to the editors
NEXT IN THIS ISSUE
Article
"Can you swim?" 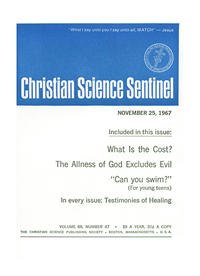