An Interview: with a Navy Chaplain

with contributions from Robert W. Hodges

Although he was reared in the mountain region of east Tennessee and early became an expert marksman, it was no human weapon, but a practical understanding of God, that Chaplain (Lt .) Robert W. Hodges took with him to Vietnam, where, more often than not, a soldier's worst foes are distress, terror, confusion, loneliness. As a Protestant Navy Chaplain serving Marines of many faiths, Chaplain Hodges' own background as a Christian Scientist contributed much to his ability to comfort others. Here he tells something of what he experienced in Vietnam, beginning with a four-day security patrol south of Da Nang.

Is it usual for a Chaplain to go out on a patrol? 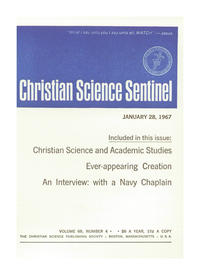