[The above is an abbreviated, postproduction text of the program released for broadcast the week of February 18-24 in the radio series, "The Bible Speaks to You." Heard internationally over more than 950 stations, the weekly programs are prepared and produced by the Christian Science Committee on Publication, 107 Falmouth Street, Boston, Massachusetts 02115.]

RADIO PROGRAM No. 203 - The Basis of Brotherhood

QUESTIONER: Much is going on today that shows a real effort among all men to express a fuller and deeper sense of universal brotherhood. In your opinion, how can these activities be encouraged and extended?

SPEAKER: Perhaps the most important thing any of us can do is to begin to see that brotherhood is based on something far more basic than racial origin, local or national custom, or even blood relationship. What we really need to see is that brotherhood begins with man's relationship to God. Without this spiritual basis, brotherhood lacks a firm foundation, and even the best human efforts toward establishing brotherhood can lead to disillusionment. 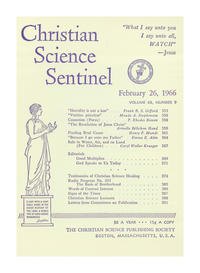