I was led to Christian Science through a friend who asked me if I...

I was led to Christian Science through a friend who asked me if I believed in prayer. My answer was in the affirmative, that I believed very much in prayer. She then handed me two copies of the Sentinel, asking me not to destroy them when I had finished with them but to pass them on to somebody else. Not wanting to offend her, I took them home. There I put them in a drawer.

One afternoon, months later, when I was feeling bored, I remembered the literature and aimlessly started scanning the Sentinels. To my surprise I became interested in them and read them thoroughly.

Send a comment to the editors
NEXT IN THIS ISSUE
Testimony of Healing
I wish to express my gratitude for the healing of what might have... 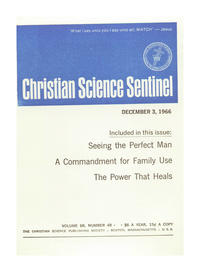