Those who have a knowledge and an understanding of Christian Science find that as they apply to the day's work Jesus' words, "With God all things are possible," Mark 10:27; their ability improves in either academic standing or athletics.

Mrs. Eddy writes: "The term Science, properly understood, refers only to the laws of God and to His government of the universe, inclusive of man. From this it follows that business men and cultured scholars have found that Christian Science enhances their endurance and mental powers, enlarges their perception of character, gives them acuteness and comprehensiveness and an ability to exceed their ordinary capacity. The human mind, imbued with this spiritual understanding, becomes more elastic, is capable of greater endurance, escapes somewhat from itself, and requires less repose. A knowledge of the Science of being develops the latent abilities and possibilities of man." Science and Health, p. 128; 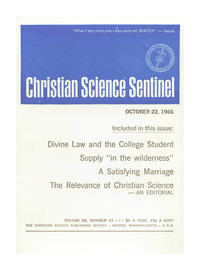