Christian Science was presented to me at a time when I was suffering greatly from a physical ailment and had been temporarily forced to give up my work.

A friend of mine had invited me to spend a few weeks at her summer home on a northern lake, and not long after I arrived she asked me if I had ever thought of looking into Christian Science. She said she didn't know much about it herself but understood that people had been healed by reading it. Someone had given her a copy of Science and Health by Mrs. Eddy at one time, and she finally located it among her books and gave it to me to read. M y only previous persona! knowledge of Science was the reading of a Sentinel, which a neighbor had given me.

Send a comment to the editors
NEXT IN THIS ISSUE
Testimony of Healing
Gratitude for Christian Science... 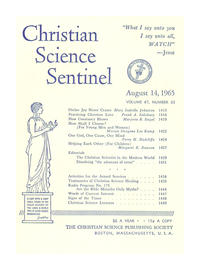