Let Us Claim Our Freedom

Freedom is man's God-given right. The people of the thirteen North American colonies discerned this fact, made a Declaration of Independence repudiating any connection with the Mother country, and fought a war to enforce their freedom. It was fitting, indeed inevitable, that a New England woman should discover the spiritually scientific sense of freedom through which men can challenge all the enslaving beliefs of a personal material sense.

In describing her revelation, Mary Baker Eddy, the Discoverer and Founder of Christian Science, writes on page 227 of "Science and Health with Key to the Scriptures, " "I saw that the law of mortal belief included all error, and that, even as oppressive laws are disputed and mortals are taught their right to freedom, so the claims of the enslaving senses must be denied and superseded." And a little farther on we read: "Christian Science raises the standard of liberty and cries: 'Follow me! Escape from the bondage of sickness, sin, and death!' Jesus marked out the way. Citizens of the world, accept the 'glorious liberty of the children of God,' and be free!" 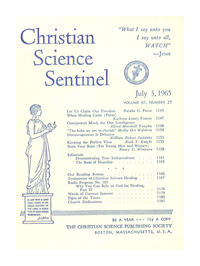