One day Peter and his mother planned to visit a friend in a nearby city. Peter was looking forward to this visit because he and this friend had such good times together. However, the night before they were to meet, Peter was not feeling well. Now Peter is a Christian Scientist, and his mother called the friend and asked her to help by knowing the truth.

Peter was asked to come to the phone. When he did so this friend talked to him about the things he had learned in the Christian Science Sunday School. She reminded him that after God had created man and the universe, He saw that His creation was good. She quoted from the first chapter of Genesis. "God saw every thing that he had made, and, behold, it was very good." She also told Peter that Christ Jesus had loved little children and had healed them. She asked Peter to remember this and to expect to be healed right then. 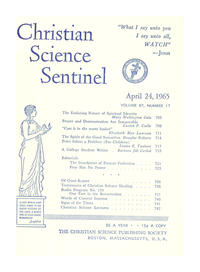