[The above is substantially the text of the program released for broadcast the week of April 2—8 in the radio series, " The Bible Speaks to You," heard internationally over more than 900 stations. This is one of the weekly programs prepared and produced by the Christian Science Committee on Publication, 107 Falmouth Street. Boston. Massachusetts 02115.]

RADIO PROGRAM No. 157 - You Can Defeat Poverty

QUESTIONER: A great deal of human effort is being expended in the attempt to wipe out poverty. But what about the individual who is up against it? Sometimes it seems that in spite of honest efforts, he is unable to find work. The result is frustration and discouragement. What can a person do in that kind of situation to break loose from poverty?

SPEAKER: First, let me say that Christian Scientists, in common with others, are concerned about the general problems of poverty. We support humane efforts to wipe out poverty. But from the individual's point of view, the way he can counteract poverty is to turn to the one inexhaustible source of riches that he can really depend on, a source that will not run out. 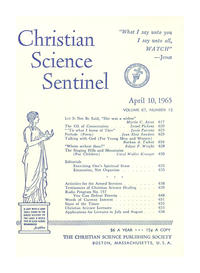