In 1937, as the result of a stroke, my mother was in a state of physical helplessness, the sight of which was hard for me to endure. However, I did not accept this condition as fate or as imposed upon her by God; rather, I rebelled against it. It was quite clear to me that God does not send us suffering. I turned wholeheartedly to Him in prayer. My thinking was ripe for a higher understanding of God, which only Christian Science could give me, and my prayers were answered through my coming in contact with this religion.

We asked a practitioner for help for my mother. Treatment through prayer was given, and the healing of paralysis took place after a few days. Two weeks after treatment was begun, my mother—completely restored—and I attended our first service in a Church of Christ, Scientist. Referring to the increased spiritual understanding gained by the disciples of Christ Jesus after his ascension, Mrs. Eddy says (Science and Health, p. 47), "The influx of light was sudden." My mother and I experienced a similar lifting up out of the desperate darkness of the situation into the peace of divine light, an overwhelming power. This power also illumined for us the dark years of the Second World War.

Send a comment to the editors
NEXT IN THIS ISSUE
The Bible Speaks to You
RADIO PROGRAM No. 155 - What Is Spiritual Healing? 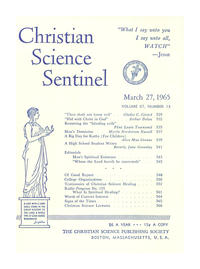