Our acquaintance with Christian Science...

Our acquaintance with Christian Science was made through a neighbor, who later became a very dear friend. She was able to help my wife in various ways when we had two young children. Later, when my wife and children started attending a Church of Christ, Scientist, I occasionally went with them only because I didn't like to attend our former church alone. Gradually I began to accept the truths I heard and within a year started to depend on Christian Science for my needs.

My first talk with a practitioner took place when I was ill after attending a Christmas party where cocktails were served. This call to the practitioner was made at my wife's insistence, as I said I didn't deserve help. But my reading of the Lesson-Sermon from the Christian Science Quarterly hadn't helped. The practitioner was so compassionate that the fear and self-condemnation left me, and I was able to sleep. I woke healed.

Send a comment to the editors
NEXT IN THIS ISSUE
Testimony of Healing
It is now about three and a half... 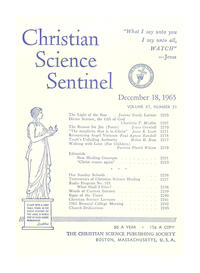