Those of us who have been...

Those of us who have been reared in families in which Christian Science was a part of daily living often take its teachings for granted. Although I unquestioningly accepted and relied on Science, I honestly do not believe I was grateful enough for all the blessings I had received as a result of it until I had to overcome a severe attack of influenza a few years ago.

The pain was so great when I coughed that I became afraid I could not breathe. I could not eat or lie down in bed. I was in such misery that I did not even want to read the weekly Lesson-Sermon from the Bible and from Science and Health by Mrs. Eddy, which is outlined in the Christian Science Quarterly.

Send a comment to the editors
NEXT IN THIS ISSUE
Testimony of Healing
For many years the love and... 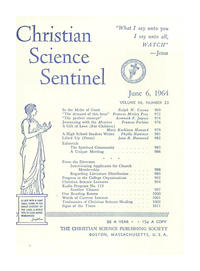