[The above is substantially the text of the program released for broadcast the week of December 13-19 in the radio series, " The Bible Speaks to You," heard internationally over more than 800 stations. This is one of the weekly programs prepared and produced by the Christian Science Committee on Publication, 107 Falmouth Street, Boston, Massachusetts 02115.]

[This is the second of a special group of programs on the subject, "The Meaning of Christmas."]

INTERVIEWER: As children, most of us were captured by the wonder of Christmas, the story of the star and the shepherds, and the child Jesus born in a manger. But I wonder how many of us as we've grown older have questioned at times—maybe in the middle of Christmas shopping—why the birth of Jesus nearly two thousand years ago should matter so much to us today. I came across one expression of modern doubt about it in the book "What's Special About Jesus?" by Robert Bruce McLaren. The author begins the book with this comment put to him by a young person: "'There are a lot of good men in the world today, and there have been a lot of great men in other times. Many of them died for their beliefs too, like Socrates and Lincoln. Yet we don't build churches in their honor or worship them. What's so special about Christ?'" [Association Press, New York. Copyright, 1963, National Board of Young Men's Christian Associations.] We'd be interested in your answer to that question.

SPEAKER: What's special about Christ Jesus is who he was and what he taught and what he did. In Christian Science we understand that Jesus was the Messiah. In other words, our view agrees with that expressed by Peter, the disciple who said, "Thou art the Christ, the Son of the living God" (Matt. 16:16). You see, it's clear from what Jesus taught and what he did that he understood God better than anyone else who has ever lived. He revealed the nature of God as Love, and he revealed man's sonship with God. By his works and his teachings he showed the way of salvation for all of us, the way of release from mortality. 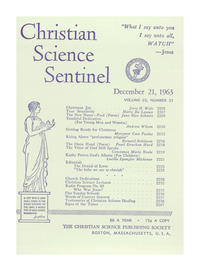