In England a great many years...

In England a great many years ago I was afflicted with pernicious anemia. The doctor said there was a possibility I would also have tuberculosis. Shortly after that a wonderful thing came to pass. Through the healing of two other persons I found out about Christian Science. A cousin of mine witnessed a healing of a friend and was then healed herself of a condition that, according to the doctors, had seemed likely to make her a permanent invalid.

She read Science and Health by Mrs. Eddy, was instantly healed as she was reading it, and was soon able to help others. She then wrote telling me all about this; so I got the book, feeling sure that it would have the same effect on me. It did. It was as though a great light had flooded my whole being, and a deep sense of gratitude and joy came over me. I felt this was the Comforter referred to by the Master, Christ Jesus, when he promised (John 16:13), "Howbeit when he, the Spirit of truth, is come, he will guide you into all truth," and I was healed. 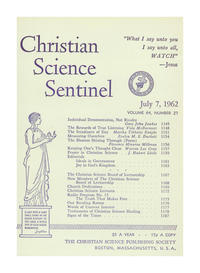