[The above is substantially the text of the program released for broadcast the weekend of June 15–17 in the radio series, "The Bible Speaks to You," heard internationally over more than 800 stations. This is one of the weekly programs produced by the Christian Science Committee on Publication, 107 Falmouth Street, Boston 15, Massachusetts.]

RADIO PROGRAM No. 11 - The Problem Drinker and Religion

HOST: Everybody knows the tremendous problem alcoholism has become. The loss to American industry alone has been estimated at more than a billion dollars annually. Fortune Magazine quoted one man as saying: "My drinking reduced everything about my work efficiency because I was always tired, always foggy. ... I lost a cool $100,000 of the firm's money."

A clue to what lies behind the drinking problem is indicated in an article on women drinkers in The Saturday Evening Post, which says, "The woman alcoholic has lost her way in life, and drinking has become a way of living." And it continues: "Instead of facing reality, they try to change it with a drink. ... They try alcohol, then they find they can't get along without it." 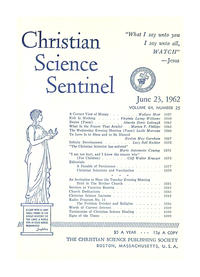