God's Man Is Not a Delinquent

The Director of the Federal Bureau of Investigation, J. Edgar Hoover, gave an address over the network of the National Broadcasting Company in which he traced juvenile criminality to the failure of adults to meet their moral obligations. Excerpts from his address appear in our "Signs of the Times" column on page 835 of this issue.

Delinquency is a term descriptive of a condition which, unless overcome in its incipiency, often ripens into something more severe, even into criminality, and is not confined to juveniles. Educators, religionists, and law-enforcing officials are giving serious attention to this antisocial tendency. What can be done to overcome it? Rightly or wrongly, much of the responsibility for it is being placed upon parents. Christian Science makes an important contribution to the solution of this troublesome problem by going to the root of the difficulty. It holds steadfastly to the spiritual fact of man's inherent perfection as a child of God. 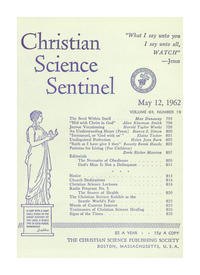