Topsy is a small black dog and a very vivid expression of joy and devotion. She especially loves children. This love provided her with care and shelter when she needed it, and when she was lost, it led to her discovery and her return home.

Topsy belonged to a family of four: a father, a mother, a girl, and a boy, and they all lived on an island. Topsy enjoyed running on the beach, swimming in the waves, trotting along on hikes, and playing with small children who came to visit. She had never been off her island and knew nothing of city traffic and strange surroundings. However, it was necessary for the family to take her to the mainland and leave her with a friend for a few days. The friend would give her good care and she could play within a fenced yard. But when the family returned four days later, they were informed that despite all precautions, Topsy had jumped over the fence the first day and had not been seen since. 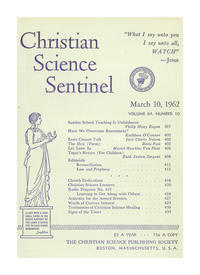