Some eight years ago I was taken...

Some eight years ago I was taken ill. The whole of my body was affected and was left powerless in every joint. I was taken to a hospital; and after a few days of many tests and X-ray pictures, the doctors finally told me I had polyarthritis, polyneuritis, and anemia.

After a year of treatment I was well enough to walk again with the aid of sticks; but the doctors told me that I would not be able to go back to my work and that I would have to learn to live with my complaints. This was distressing to me, and I became full of fears. It seemed as if my life were virtually at its end.

Send a comment to the editors
NEXT IN THIS ISSUE
Testimony of Healing
No one could have more to be... 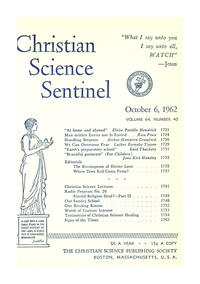