Nearly forty years ago my mother...

Nearly forty years ago my mother and I were pronounced incurable by five doctors and two specialists. Mother suffered from arthritis, and I was a victim of angina. We had the best medical treatment available in England, but it was of no avail. Shortly afterwards we took up the study of Christian Science in earnest, and with the help of a Christian Science practitioner my mother was healed in three weeks. Her testimony was in the Sentinel of July 27, 1940. It took me much longer to lose the fear of the angina attacks from which I suffered, but I was eventually completely healed through Christian Science treatment alone.

Some time later, while my mother and I were taking a train journey, the door of the carriage was accidentally slammed, trapping my hand and breaking the middle finger. Fortunately we were alone in the compartment. Wrapping my hand in a scarf, I said, "Please help me quickly." 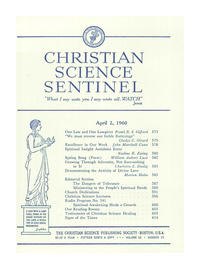