Humanity always has been in need of safety and security and has sought them in many ways. According to primitive religion and pagan mythology, there were gods governing not only the things men needed but the conditions they feared, gods to whom they must offer sacrifice in order to be secure. Today many people look for safety and security in other ways, such as legislation, insurance, and medical inoculation.

In the Bible we read of individuals who sought and found safety through spiritual means by entertaining the concept of one God and of man as living in obedience to God's law. Noah, in the face of impending disaster, was guided by God to build an ark in which he, his family, and living creatures rode in safety above the flood waters which overwhelmed the land. 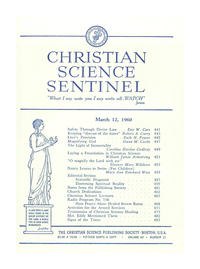