"Stranger, thou art the guest of God"

Having heard that Christian Science heals, a man stepped into a Christian Science Reading Room to inquire about the availability of practitioners as well as to borrow a copy of the textbook, "Science and Health with Key to the Scriptures" by our Leader, Mary Baker Eddy. He had been out of work for some weeks because of an injured arm. The librarian talked with him about the healing power of Truth and of man's inseparable relationship to God.

As the librarian continued, the man's thinking became so enlightened and uplifted that he realized it was entirely possible for him to be healed if he accepted and understood, even to a small degree, the truths set forth in the pages of Science and Health. Within two weeks the proof was realized. His arm was healed, much to the surprise and delight of the company doctor, who gladly issued a certificate allowing him to return to work.

Send a comment to the editors
NEXT IN THIS ISSUE
Testimony of Healing
I have read so many testimonies... 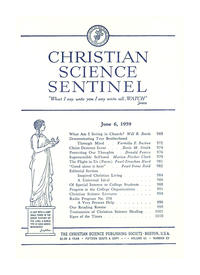