COMING TO ONE'S SELF

OF one returning to normal mental activity after having been unconscious, it is often said that "he came to himself." Similarly, when through fear, provocation, delusion, or other distraction one has been led into a wrong field of thought and action, one's restoration to the right path is referred to as coming to himself. Though it is not as yet universally known to mortals, we are in truth eternally awake, alert, always the sons of God. The real man does not need to come to himself.

In his first epistle John declared (3:2), "Beloved, now are we the sons of God," and he added, "It doth not yet appear what we shall be: but we know that, when he shall appear, we shall be like him; for we shall see him as he is." From this we see that as a prerequisite to coming to ourselves, we must learn what our real selfhood is; and to learn this we must first get a true and faithful concept of God. 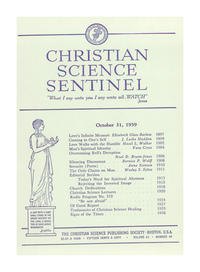