A higher position does not of itself constitute promotion. Right promotion must be the outcome of spiritualized thought. Mankind believes that progress is made from limitation to betterment or toward greater intelligence. On the other hand, spiritual progression denotes orderly, continuous activity emanating from an all-intelligent source.

Progression is an eternal state of infinite being. Deity cannot become stagnant, but is eternally active, forever expressing Himself. And man, God's likeness, must express or show forth measureless progression, for as Mary Baker Eddy writes in "Science and Health with Key to the Scriptures" (p. 258), "God expresses in man the infinite idea forever developing itself, broadening and rising higher and higher from a boundless basis."

Send a comment to the editors
NEXT IN THIS ISSUE
Article
"WHO HATH BELIEVED OUR REPORT?" 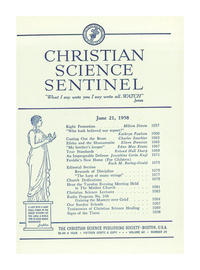