Scientific ultimatum" is the marginal heading under which Mary Baker Eddy writes in "Science and Health with Key to the Scriptures" (p. 492), "God is Mind, and God is infinite; hence all is Mind." It is recorded in the first chapter of Genesis that "God created man in his own image, in the image of God created he him."

If we accept the record of man as created in God's own image, we understand that man is not a separate entity turned loose on his own to shift for himself. He is an individual idea in the infinitude of Mind's creation. In Acts we read (17:28), "In him we live, and move, and have our being." Is there any safer place where one could reside? No! 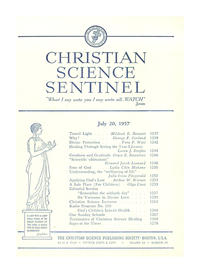