PUT THE BEST ROBE ON HIM

In the much-loved parable of the prodigal son, Christ Jesus taught many precious lessons. The lessons of forgiveness and restoration are two of these. At the request of his younger son, the father in the parable divided his goods and gave this son's portion to him (see Luke, Chapter 15). The son went far from his father's house and wasted his goods. Finally he came to himself and started back to his home. His father saw him while he was far off, ran to meet him, and treated him compassionately.

After the son's expression of remorse and humility, the father commanded the servants to "bring forth the best robe, and put it on him; and put a ring on his hand, and shoes on his feet." The father rejoiced that the son had returned; that he who "was dead," unresponding to truth, was "alive again," awake to a higher sense of existence. It was not just any robe that the father put on him, nor a second best; he called for the best robe to be put on him. A ring was put on the son's hand and shoes on his feet. He was restored to an honored position as the father's son. 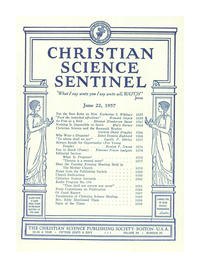