THE ONLY CREDIBLE EVIDENCE

"Science reverses the false testimony of the physical senses, and by this reversal mortals arrive at the fundamental facts of being." Thus on page 120 of the Christian Science textbook, "Science and Health with Key to the Scriptures," Mary Baker Eddy gives us the basis for determining what is real and what is illusive.

There was a time when the people of the world believed the earth to be flat because it appeared to be so. There have been individuals through the centuries who have dared to discredit what their eyes have told them. Through reason based upon the observable evidence of various laws, not upon visual sense, certain early Greek astronomers came to the conclusion that the flat appearance was merely illusion. Columbus, an Italian seaman, was one who later proved this fact, because he did not believe the illusion of a flat earth. His discovery helped to release the world from limitation and to open opportunity for freedom, expansion, and progress. Mankind have proceeded to prove unmistakably that although the assumption that the earth is round contradicts our material sense of sight even now, it is nonetheless a fact. 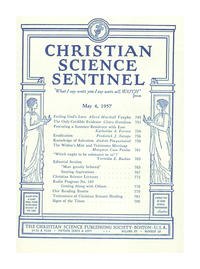