IS THERE FROST ON THE WINDOWPANE?

WHEN a small child, the writer lived in a northern state where the winters were severe. She remembers very well those wintry mornings when the windows were covered with frost. She discovered that by breathing on a windowpane she could clear the frost away from a very small area. Thus she could see the world outside. But what she saw was only a glimpse of the whole. The view was invariably meager, because much of the scene was shut out by the frost on the windowpane.

This experience has come back again and again to the writer, and with added significance since she became a student of Christian Science. This Science cannot be understood if one attempts to divide it into parts and to look only at that which appeals to his fancy. It is the undivided garment, the whole Christ, which provides absolute evidence of divine reality. 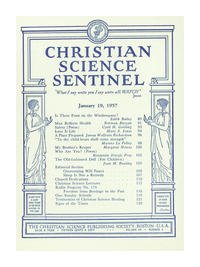