THE SECRET OF SUCCESS

What makes a successful man or woman? This question is often asked of those who have achieved outstanding records in business or professional activities. It is generally agreed that one of the foundations of success is hard work. But true success is not accomplished merely by hard work—physical or mental. The individual who would be really successful must have a purpose in life, and a purpose which leads away from self to selfforgetfulness.

Christ Jesus was the most successful man who ever lived. His demonstrations of divine power made him the master of every situation. The secret of his great success is stated in his own words when he said that he had no power to do anything of himself but that his ability to know and do good came from God, his Father. And he also told his followers that the same mighty works would be accomplished by those who followed in the way he mapped out. 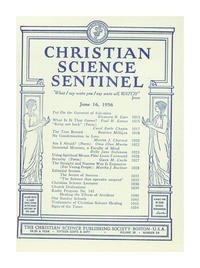