Protection from hurricanes and other phases of evil is available through the power of spiritual law, as indicated in the ninety-first Psalm. This Psalm tells us that God is our "refuge" and "fortress" —two words which have a slightly different meaning. The refuge is a place of protection. So is the fortress; but in addition to protecting, a fortress has armament which, used effectively, can destroy the attacking enemy. In like manner, the understanding of God and His omnipotence as revealed in Christian Science is not only a source of protection from evil but a basis on which the evil can be obliterated.

Do we fear that a storm may destroy much of our city? We should ask ourselves, "What is the real city in which we live?" Through Science we understand that it is not a community of human beings, but a divine state of consciousness, into which no error can enter. Carrying this reasoning further, we see that the state or province in which we live is not a geographical area, but is, like the city, a state of spiritual consciousness. This reasoning is a protection to us and gives us the refuge mentioned in the ninety-first Psalm. But we should also do some reasoning about our true fortress. Right reasoning will eliminate the seeming destructive force and will show that it has no basis on which to form, build up, exist, or move. 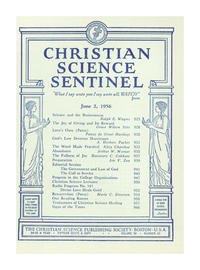